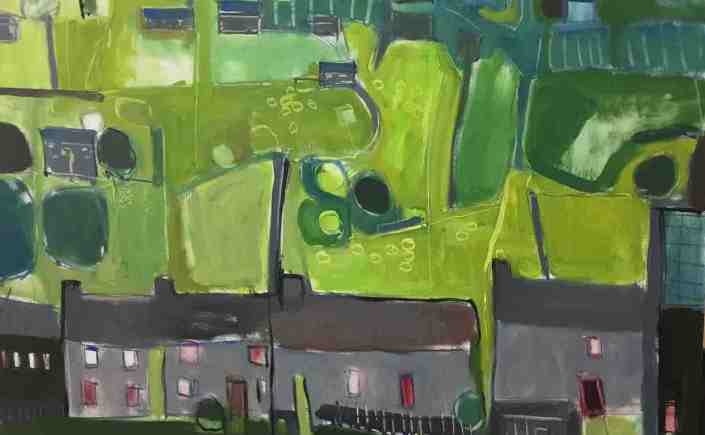 Thursday afternoon, about 1pm, that was my brick wall.

You don’t see them coming by the way, and I hit this one fairly soundly, but I’m getting ahead of myself.

I’m painting this week is the context. That doesn’t sound remarkable of course, because I teach painting for a living. But I mean Painting (with a capital P), that’s painting for my self and for my all too imminent show ‘Beyond Here‘, which opens on the 24th of October this year.

I’d confidently set aside the week for painting, as I’m about twenty canvases in now, my themes are established. my visual language is looking right, and glancing at a studio full of the things on Monday I was feeling pretty sorted.

But – there’s always a ‘but’ in creative matters, that niggle if you will.  But… I’d only painted large scale, because quite frankly I love the physicality of working big, and the question was, the problem was, the ‘but‘ was, could I take it down a notch or two to a more domestic scale?

Well I have, and I am, but (there I go again), I just don’t like them as much. So I downed tools on Thursday and have given myself a day to kick it about.

Size lends painting a physical presence, dignifies the simple and accommodates the complex. Years ago I stood in front of a huge Turner which was – and he wouldn’t forgive me, just awful.  Bad composition, awkward figures, broccoli like trees, clumsy narrative, yet because it was the size of a small house it was compelling. 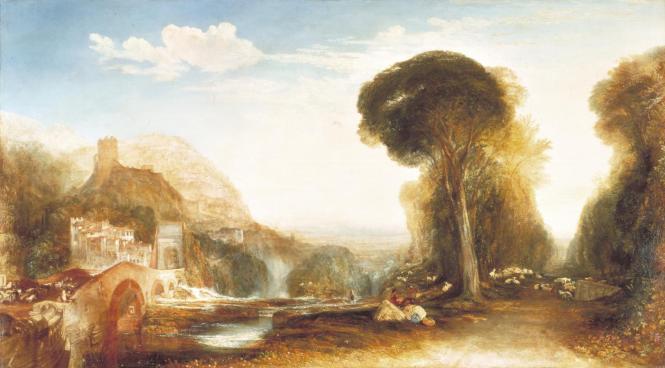 Palestrina by Turner. At this size it looks awful, but in the flesh it’s an overwhelming presence.

Now i know it doesn’t have to be like this, because Jane and I went see Kandinsky to Van Gogh, back around ’09 from memory. It was a show about post expressionism really, the ‘now what do we do’ bit once artists realised that classical painting wasn’t the way to go, and Impressionism was as fleeting as its name would suggest.

An impressive show, with lots to see from Whistler to Mondrian, lots of northern expressionists whose names my keyboard can’t do justice to (too much of this Ö malarky and this Ä nonsense)  and even a Da Volpedo, looking awkwardly Seurat like in the corner. But the real star of the show was the eponymous Van Gogh, and reader, it was the size of a small paperback. But (again!), it just glowed. Yes, it might have been small, but it fizzled with energy, creativity and colour. 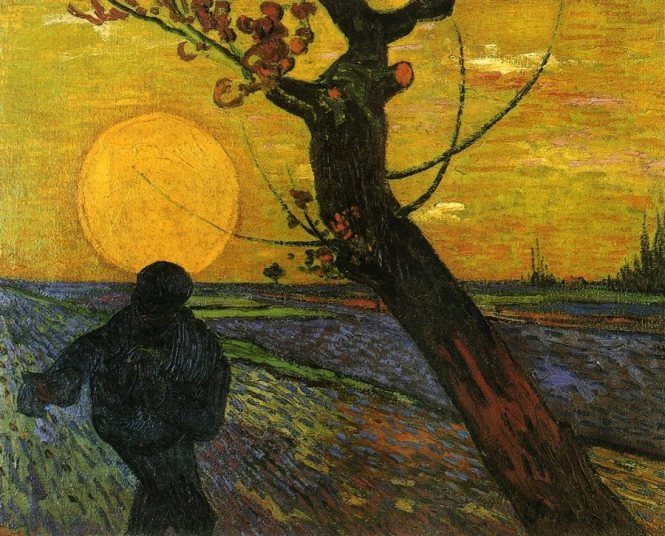 Tiny but it stole the show. Van Gogh the Sower, and as it turns out my motivation to do better.

So a benchmark, and in the world of struggling with one’s personal creativity or lack thereof, benchmarks are good things. When the small ones are half as compelling as Van Gogh’s The Sower I’ll be a happier man, and post a few up.

In the interim, we signed off the launch of Beyond Here today,  It will be at Tennants of Leyburn (very accessible from the A1, and on the edge of the Dales near my studio), on the 24th of October, but I very much hope you’ll join me for the my talk (and quite possibly paint and talk) about the show on the afternoon of Saturday the 27th 2pm – 4pm.

I confidently expect to present works – both big and small – which will do my feelings for this astonishing bit of Britain justice. See you there, I’ll be by the small picture in the middle of the big wall.

3 thoughts on “Size, it really does matter.”