I come to this from a very enjoyable chat with a very talented young artist who is trying her level best to make it as a painter. So here’s the thing:

Her post degree work is very much a reflection of Approved Art – and by that I mean Art which deals with the ‘post internet’ age (whenever that happened, I thought we were still in it). It’s about visual media, broadcast, interactivity and all that jazz.

These she was assured, are impossible things to address with such a resolutely analogue process such as painting: It’s a fool’s errand to use paints when a keyboard is to hand , seems to be the doctrine passed down from the Wise Masters of our Art Schools. .

Technology might change the potential means of artistic expression, but the idea that those means should change just because they can, feels like a desperate attempt to substitute works of genuine substance with stuff that is merely NEW.

One of the tests of contemporary Art is (apparently), that ‘it could only have been painted now’. To adhere to this folly is to have the tail of technique wagging the dog of artistic intent.

The result? A succession of students falling over each other to digitally manipulate, to video, to broadcast, to pod cast , to interact and be interacted with. The output it seems is everything, the input sadly can be anything.

The tragedy here is that it’s really not that difficult, to find inputs of substance – in fact you already know and have experienced most of them  – because Art is really just about things we all care about – Global Truths.

Global Truths; we like to meet each other, we generally focus on inconsequential things but try not to think about our mortality, we keep in touch otherwise we become lonely, we are interested in money, other people’s lives and sex. We worry about our health, we tend to be self obsessed  – you get the idea.

In short we’re Human and we’re interested in Human Truths. A list of the world’s favourite websites reveals this to be resolutely true.

And here’s the point, whatever technological means of communication come along in the future, people are fundamentally interested in people.  The job of Art, is to be a mirror to all of this , speak to us directly, honestly and powerfully about where we came from, where we are and where we are going.

This was the case in 1669 when Rembrandt painted his greatest and most touching self portrait of hubris, defeat and regret, and it was certainly true in 1842 when Turner at last began to come to terms with his own mortality in his elegiac picture Peace, Burial At Sea.

Peace – Burial at Sea exhibited 1842 Joseph Mallord William Turner 1775-1851 Accepted by the nation as part of the Turner Bequest 1856. Mortality has will always be in fashion, as Mr Hurst will assure you.

Would the ‘post internet age’ make these works substantially different? We still fail, we still regret, we still die, so when did painting suddenly  loose it’s potential to express these things?

I would argue, the very strength of painting is its analogue nature – because we’re not machines, we are imperfect, ambiguous, make – and forgive – mistakes. We’re imaginative, curious  and impulsive. Painting, it seems to me, far from being irrelevant, is the perfect way of capturing us. 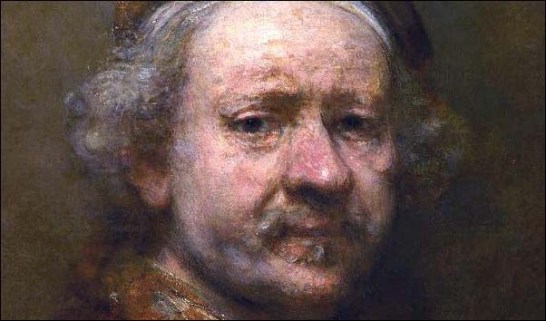 The Shock of the Old: failure comes to all of us: Rembrandt’s work is about Human Truths, his media and his subject are imperfection

Machines work against that, they see and record through a high resolution precision lens  not an imperfect eye, they remember and record every detail, not just the bits that stood out, they record time as it happened, not how it seemed to run… I really can’t see the fit.

This is as good a reason as any to get engaged with the paintings of Turner, soon to be revisited at the wonderful Tate Contemporary Margate,  in Turner: Adventures in Colour.

Turner’s early works were pretty standard for the day, but his later pictures became images not simply  of the Blue Rigi, or Venice or the Temeraire, but meditations on the human condition.  As Bacon observed, the role of the painter is to deepen the mystery, and for the life of me I can’t see when conjuring up images of the mysteries of our existence became all so very 20th century…

Sun Setting Over A lake. Of a lake but about coming to terms with your mortality. Irrelevant? I think not.

If celebrating imperfection and Human truths is your thing, then you’ll be pleased to hear that my Painted Garden Show went so well it’s being committed to disc, and digital PDF, so you can celebrate the very human vicissitudes of life by seeing it on your computer. Now there’s an irony for you.

Of gardens but about people; how very analogue of me, but don’t worry you can see it all online soon , how very contemporary.